I’m not nervous to go to French pastry school at Lenôtre like I was my first day at AZ Culinary Institute, even though this is taught in French, and there are MOFs here, and French pastry is what I idealize. It just seems right, and fun! 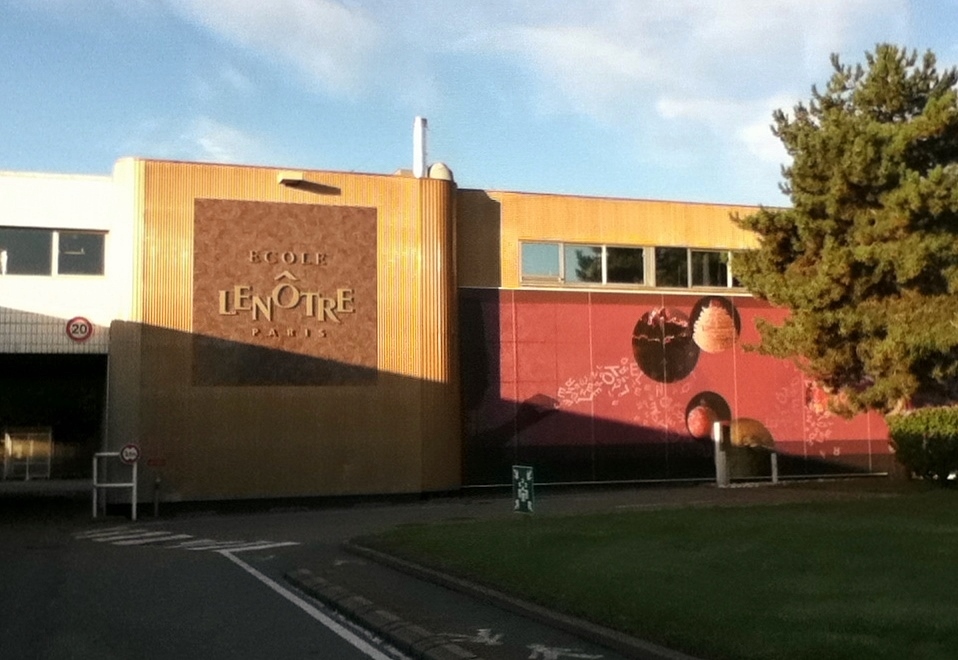 Arriving at Ecole Lenôtre is like walking into Willy Wonka’s chocolate factory. You enter at the main gate, passing lines of Lenôtre vans loading up boxes of macarons and chocolates. You smell fresh pastries as you reach the student lounge. And workers in uniformed purple jumpsuits are all around fixing things, aka the Oompa Loompas… 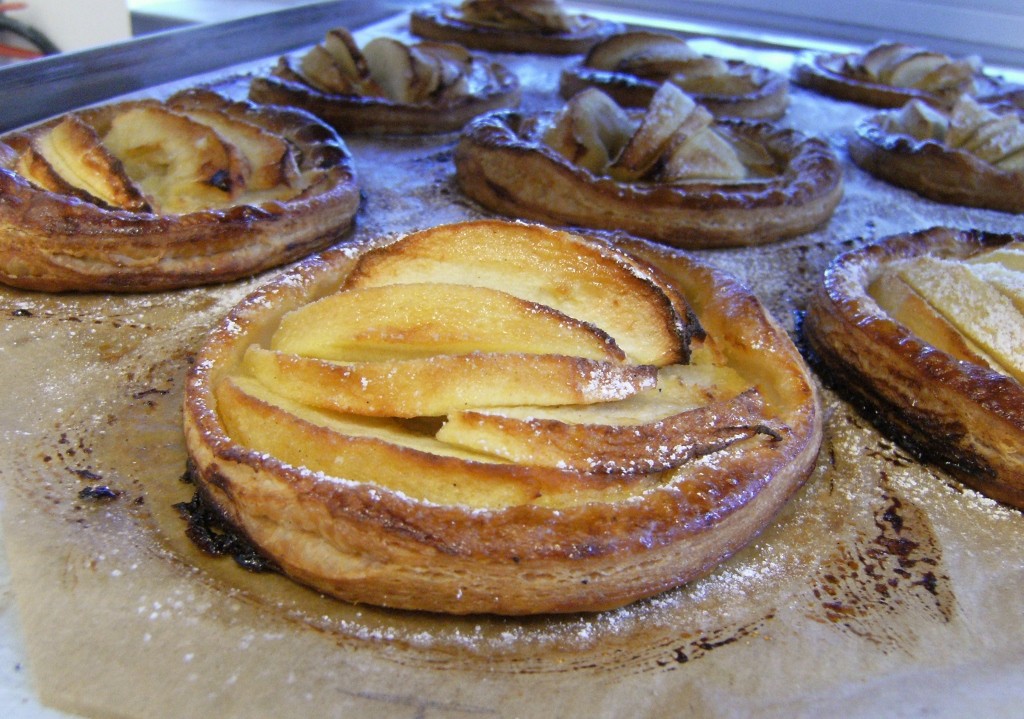 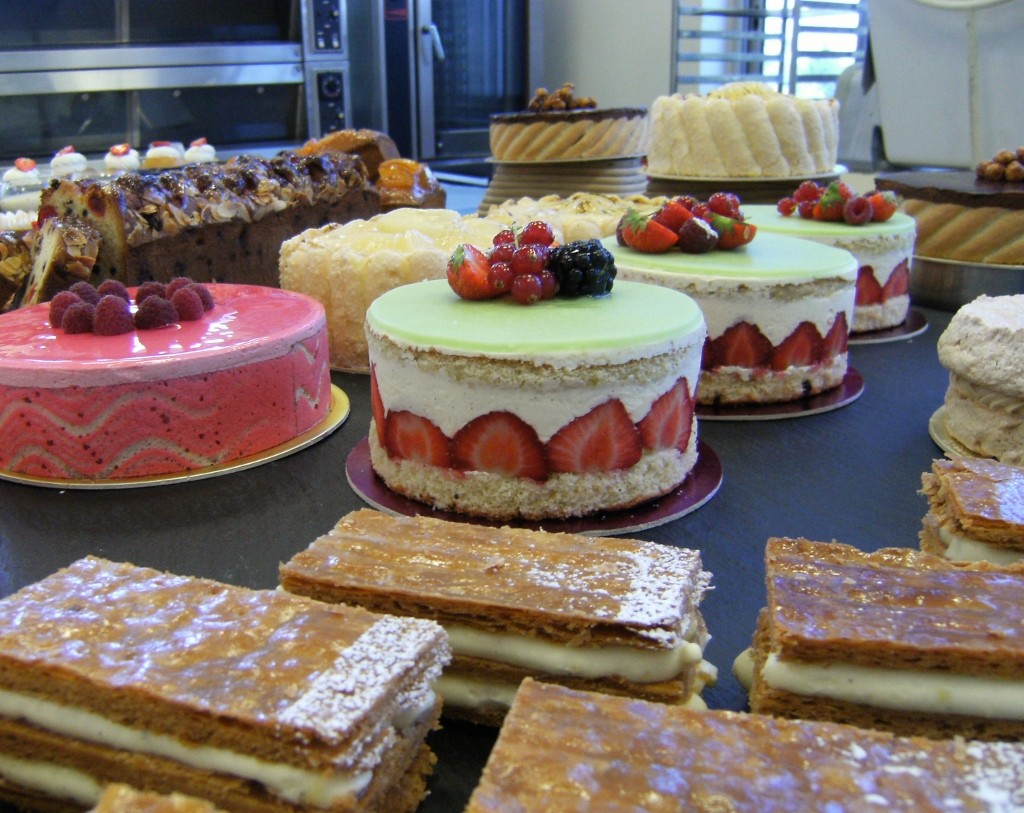 My French chef is not the screaming Gordon Ramsay type. He’s patient and funny. When a student asked what was in the whipped cream, he started listing off pamplemousse (grapefruit), pepper, and ketchup… Chef is in his fifties or sixties, but is always running around looking for something, “Je cherche…” He’ll come back carrying a huge robot coupe mixer, knees buckling and grunting as he walks through the door and then jump right on the counter to plug it in. He brings us little macarons each day that he swipes from the class next door. And he is always sticking his finger in stuff to taste. 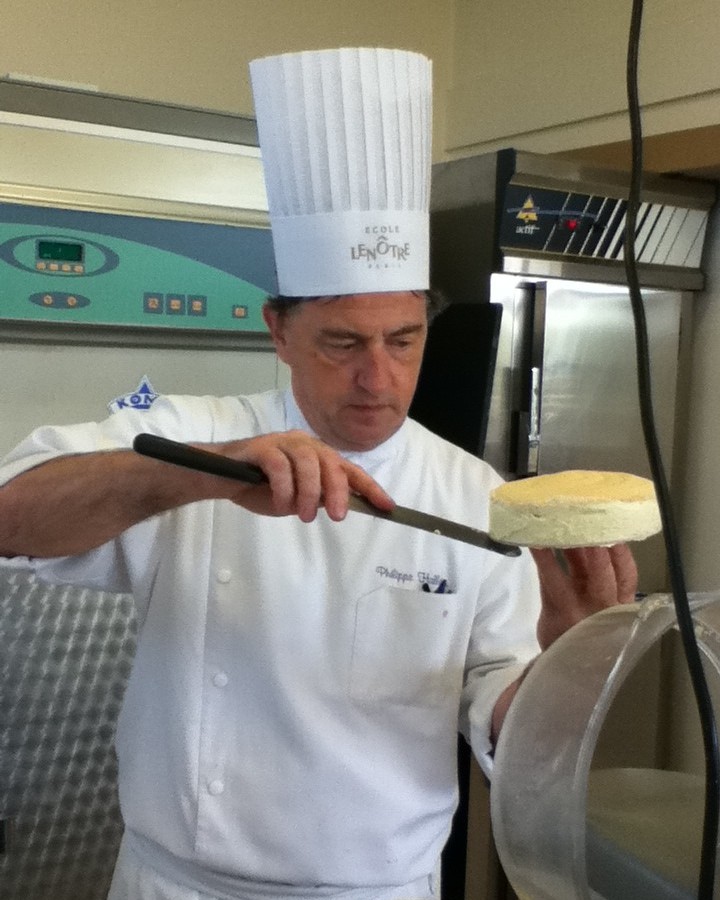 After picking up a few vocab words and rebooting my high school/college French, I handle directions pretty well like “regardez le four” (check the oven) or “prenez une plaque avec une feuille” (grab a sheet pan with parchment paper). When he goes off on a tangent, I understand on a scale between “main points” and “a word or two.” Between the demos and my peers, though, I get by. Pastry’s a pretty international language I find out. There are a few times I was completely off though. Chef asked for what sounded like “camembert,” so I head to the fridge to get the cheese, when “camembert” is actually the brand name of a pastry thermometer. The cheese didn’t help. Another time, he gave me a spoon with some whipped cream on it and said something, so I took a taste, and nodded, “C’est bon!”, but he’d told me to go wash it. He laughed pretty hard over that one. 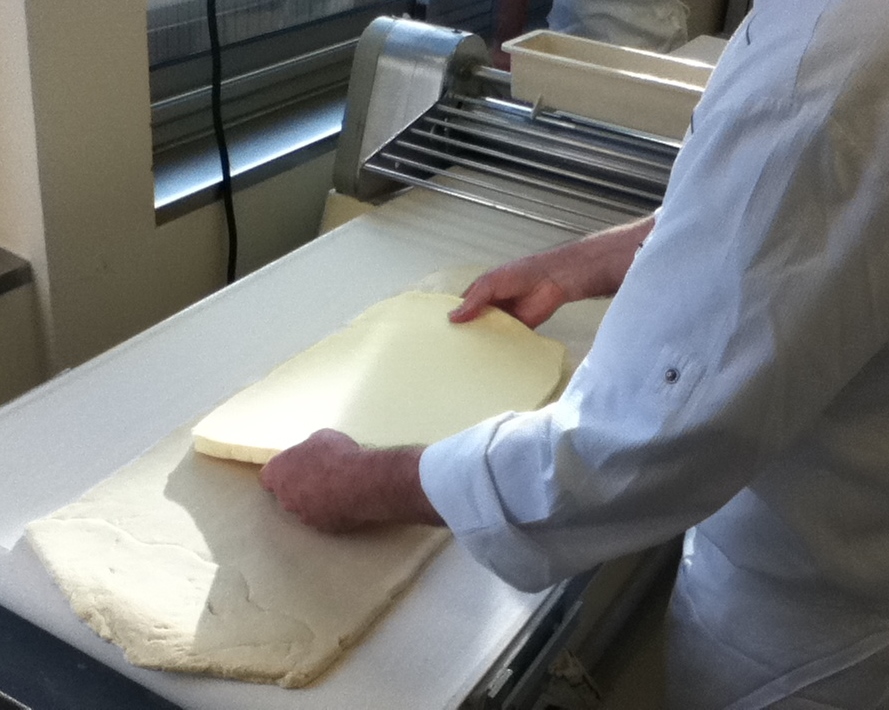 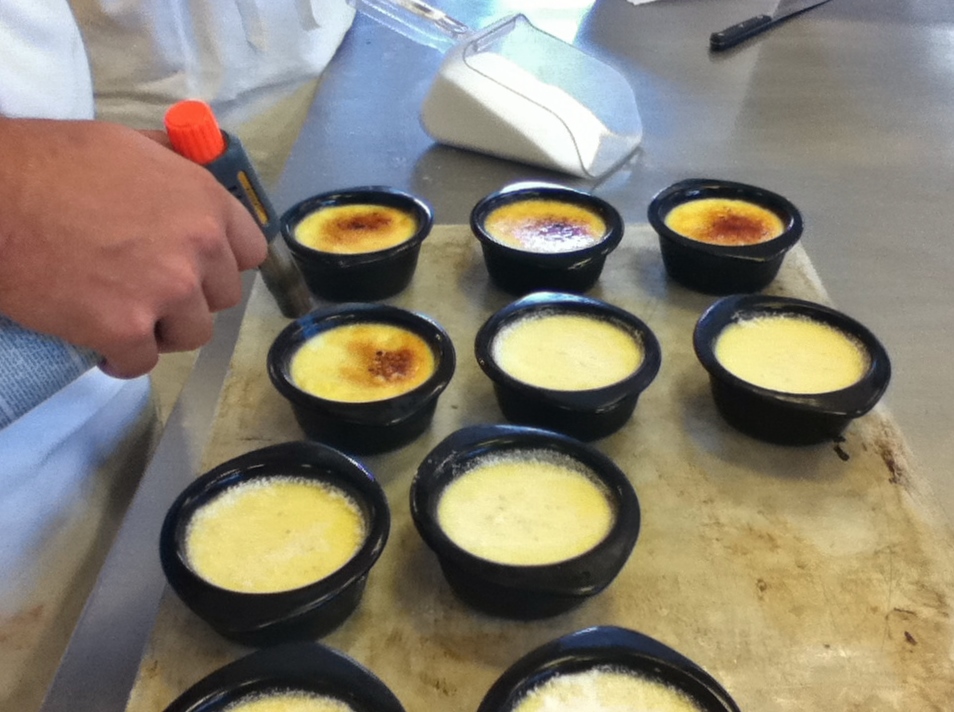 My classmates are nice and all very talented. They call me Mr. Arizona (mr. arr-ee-zona). The most popular topic of conversation among the younger guys is where they’re going to do their apprenticeship after they finish school. Most of them commute from Paris everyday. A middle-aged guy named, Karl, who’s helped me out a ton, owns a bed & breakfast, 30 min south of Plaisir and is studying here to improve the “breakfast” part. I wish I’d known about his b & b sooner. In my dorm, the toilet doesn’t have a seat and the shower’s a plastic-coated closet in the hall. But it really doesn’t matter. I’m in French pastry school!

Plaisir, the small suburb outside of Paris where I’m taking my pastry course, is not the sea of track homes you find in Phoenix’s suburbs. It’s a quiet little town with rocky walls and no stoplights. 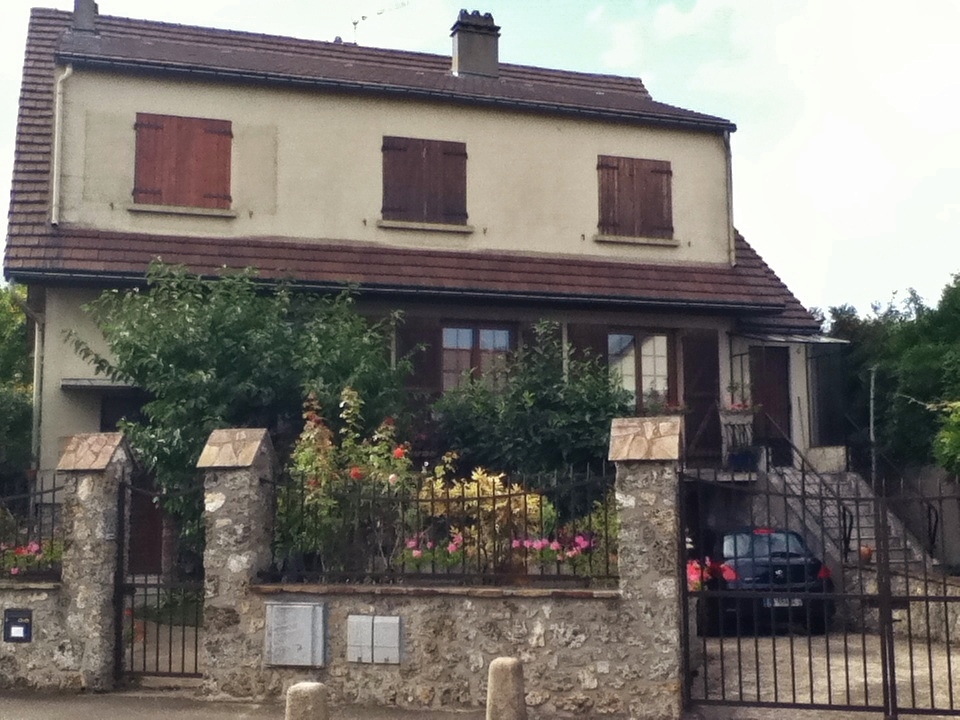 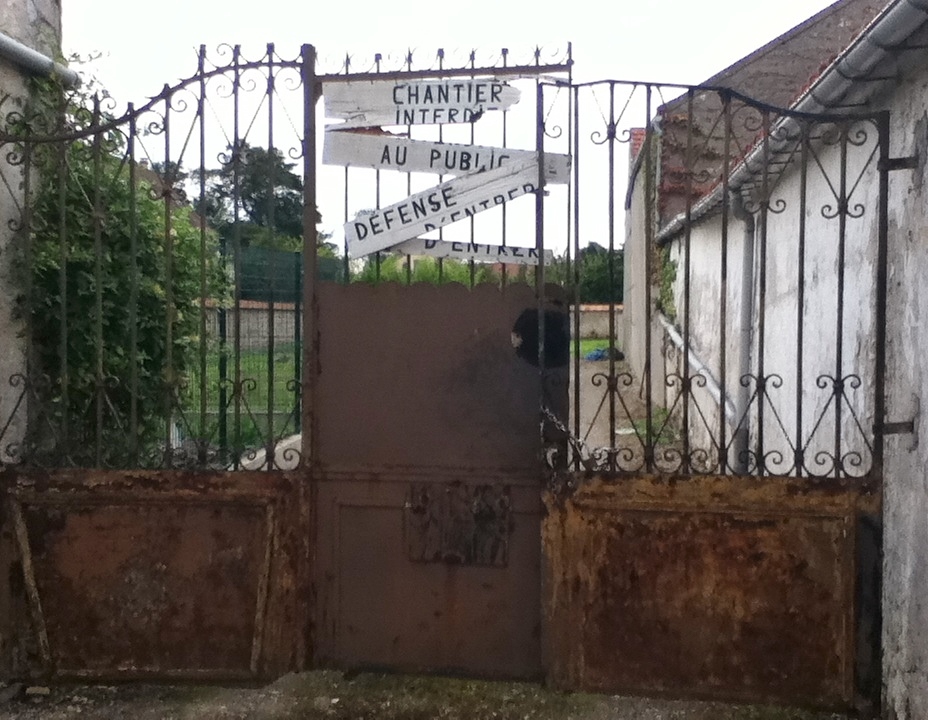 After four days, I’ve pretty much been to every food establishment in Plaisir: the Italian restaurant, the French “Red Lobster,” the local pub, the charcuterie (meat shop) and bakery, and the grocery store. There’s just one left… the Pizza-Moroccan-Tex Mex takeout place. I’m saving the best for last. It turns out Tex Mex means bbq wings, so I go with the lamb tajine that they cook in a traditional clay pot. It’s like chicken soup on a rainy day. It comes nice and warm with a piece of bread you can use like a spoon. It really is the best of Plaisir. 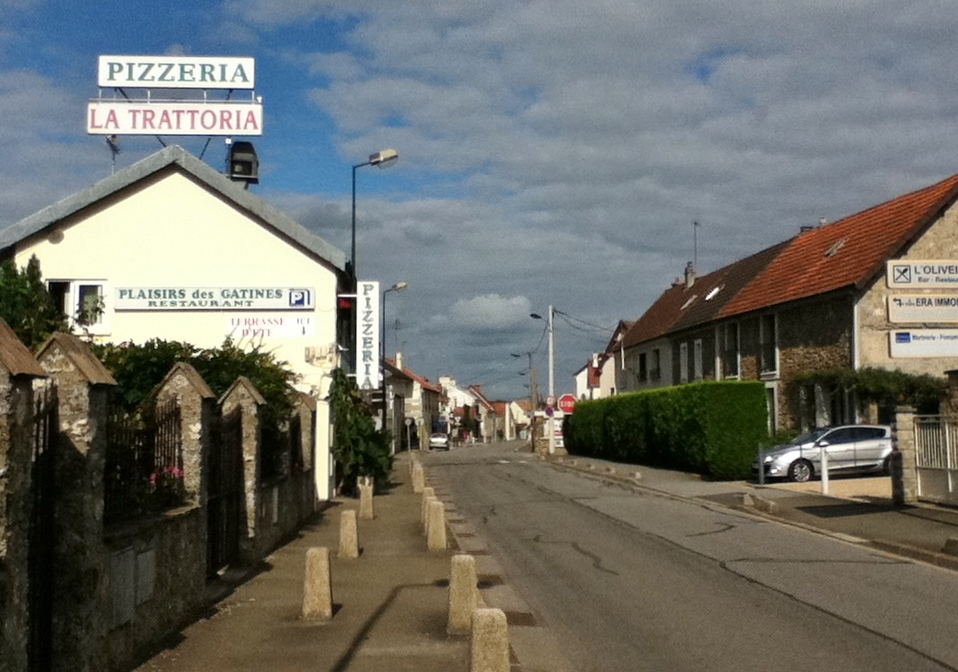 how to make macarons

I’m book-ending this trip with French pastry classes at Lenôtre, so where I started this adventure over 3 months ago, I’m now ending it.

Tonight, I’m returning to the Tunisian takeout place for some tagine, my favorite of Plaisirian fare. The owner calls me “mon chef” and gives me an extra piece of flat bread with my order. I’m not even wearing my checkered chef’s pants tonight. I guess when you go to a place more than once in Plaisir, you instantly become a regular, even if it’s three months later. While the last course was an overview of a lot of different pastries, this course is all about the macaron and the many flavors you can derive from it. Take basil lime or chocolate passion for example. For the purists, we’re still learning chocolate and vanilla bean. 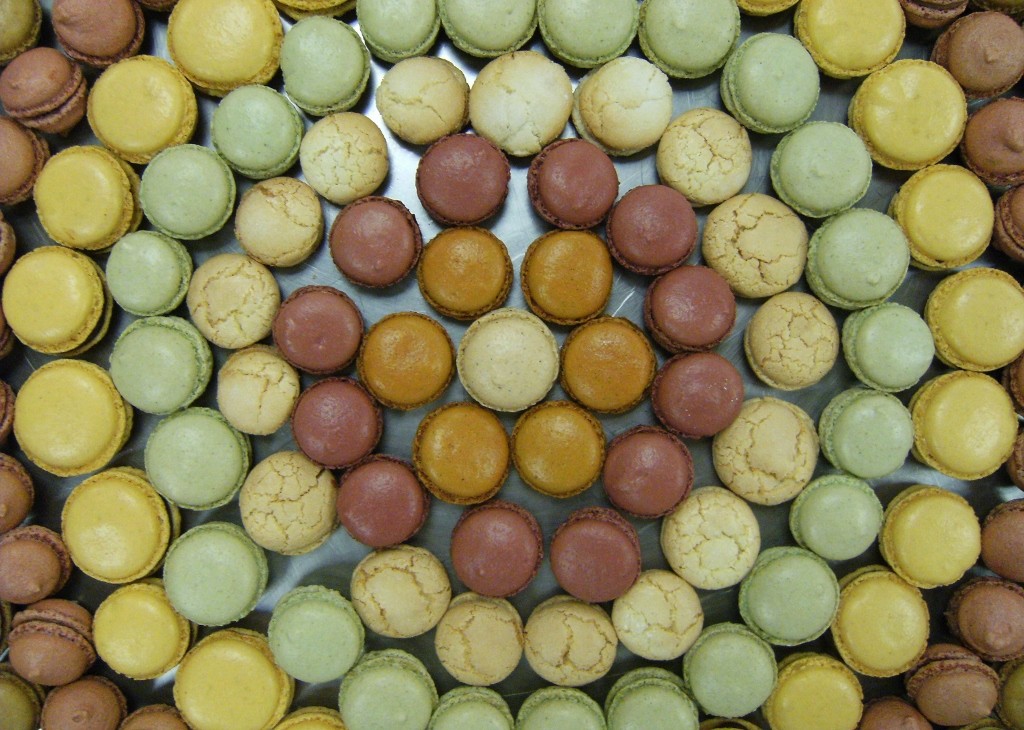 My instructor is a tiny Frenchman with intense blue eyes. He tells us the secret to macarons is in how you incorporate the mixture. You have to do it gently and rhythmically, and if you want to imitate him exactly, stare mesmerized into the bowl as you’re doing it.

While my first class was full of French guys, my classmates this time around are a bunch of southern hemisphere girls: Paola and Elisa from Brazil, Belen from Argentina, and Cindy from Australia. Our only native French girl, Elodie, is of Chinese descent, but the director of the school wrongly assumes she isn’t French and congratulates her, “You speak French very well!” 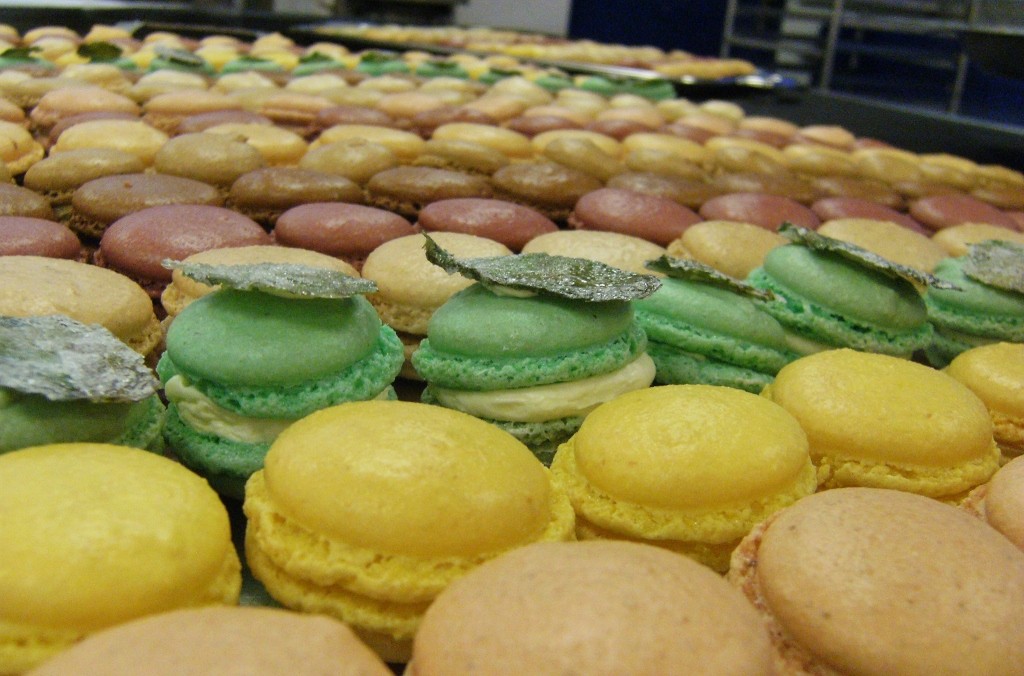 This time around, the course goes smoother although my Italian gets a little in the way. “Pot” (pronounced po in French) means “container,” but in Italian, “po” means “a little.” I have some batter and Elodie ask me for a “pot,” so I think she wants a little. When I start to scoop some out, she says, “Non, un petit pot,” so I think ok, ok you want less, but finally Paola helps translate.


Paola and I get along well. We both switched career tracks to study cuisine and pastry. I feel sorry for her because she’s been in Plaisir since August. She tells me doing laundry is the biggest thing she does here. It’s like going out to the movies. The nearest laundry facility is three and a half miles outside of town and the bus only runs every hour, so it turns into a half day adventure. Plaisir’s the only place I know where the hotel rates are cheaper on the weekends. If you have free time, you’re not spending it here. 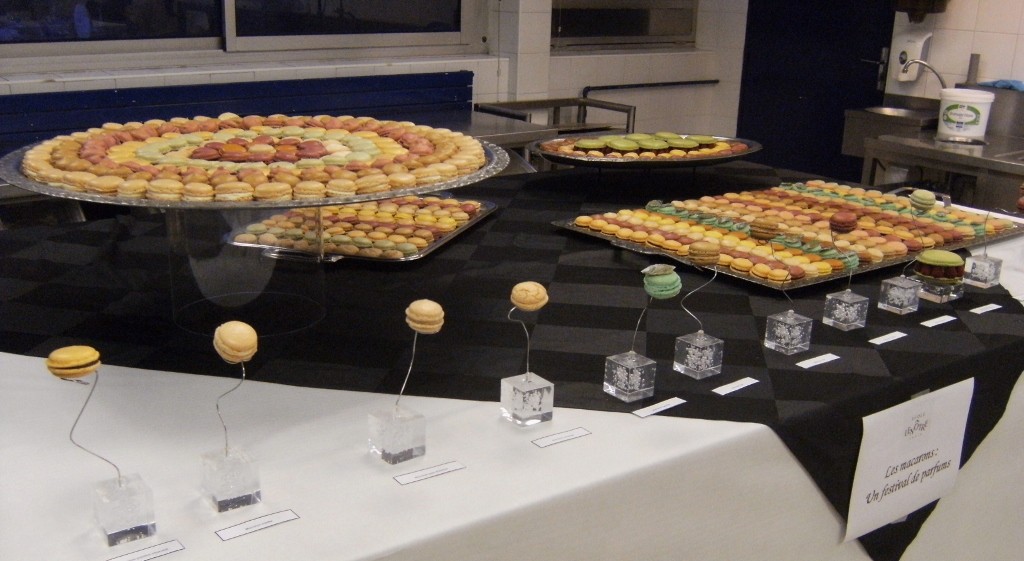 or take the bus through the Loire Valley